The Delirium Wiki is a free, public and collaborative encyclopedia dedicated about Lauren Oliver's best-selling dystopian trilogy, Delirium, that anyone can edit!
We currently have 105 articles and 124 files that we need your help to expand, and we would gladly appreciate it.

Lauren Oliver says that the inspiration for Delirium came to her one day at the gym. She had recently read a Gabriel Garcia Márquez essay where he said that all books were about either love or death.

Since her first book, Before I Fall, was about death, she wanted to write a book about love. At the gym she was watching a news report about a pandemic, and the two ideas combined in her head to form the central concept of the Delirium novels.
IMPORTANT NOTICE: Please respect all views and all perspectives. This wikia is meant for a better understanding of the novels, and for a strong, friendly community. Hateful or vulgar posts against someone or something can and will be removed by the Admins. Thank you for reading this notice; please spread the word, and keep it nice. This wikia contains major spoilers, either from the show, or book series, or both, and they are in no way censored.
CAUTION: This wikia contains spoilers from the Delirium trilogy novels.

Requiem is the third and final book in the Delirium trilogy by Lauren Oliver. After rescuing Julian from a death sentence, Lena and her friends fled to the Wilds. But the Wilds are no longer a safe haven because rebellion is slowly spreading throughout the country and Regulators are infiltrating the borderlands to stamp out the rebels. Back in the city, Lena's best friend, Hana Tate, is living a safe, loveless life in Portland as the fiancée of the young mayor. The two girls are living side by side in a world that divides them but, in the end, their stories eventually converge.
Read more... 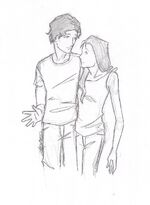 Alex Sheathes is the main love interest of Lena Haloway in the first book of the series, Delirium. He is described as having auburn hair, gold eyes, and tan skin. He also has a three-pronged scar that all citizens get after their procedure at around 18, but his is a fake, meaning that he is uncured. He is an Invalid, having grown up in the Wilds.
Read more...